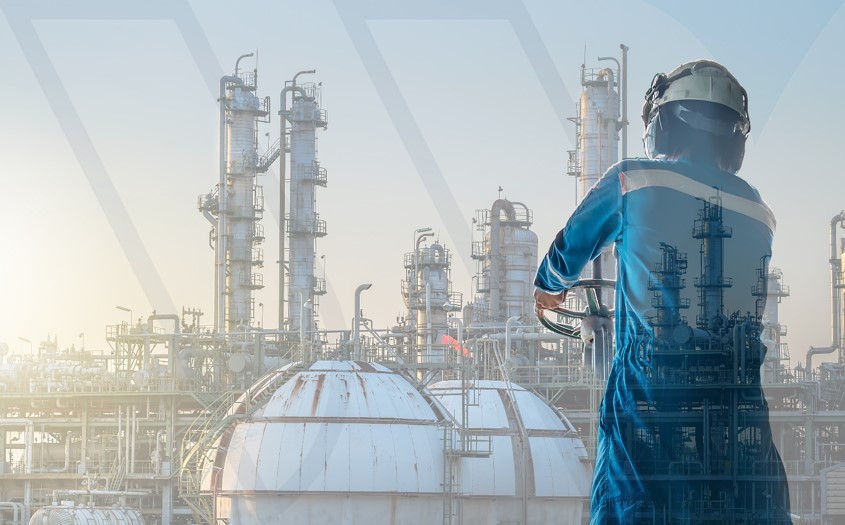 Distributing Project Risk Amid A Ramp In Renewables 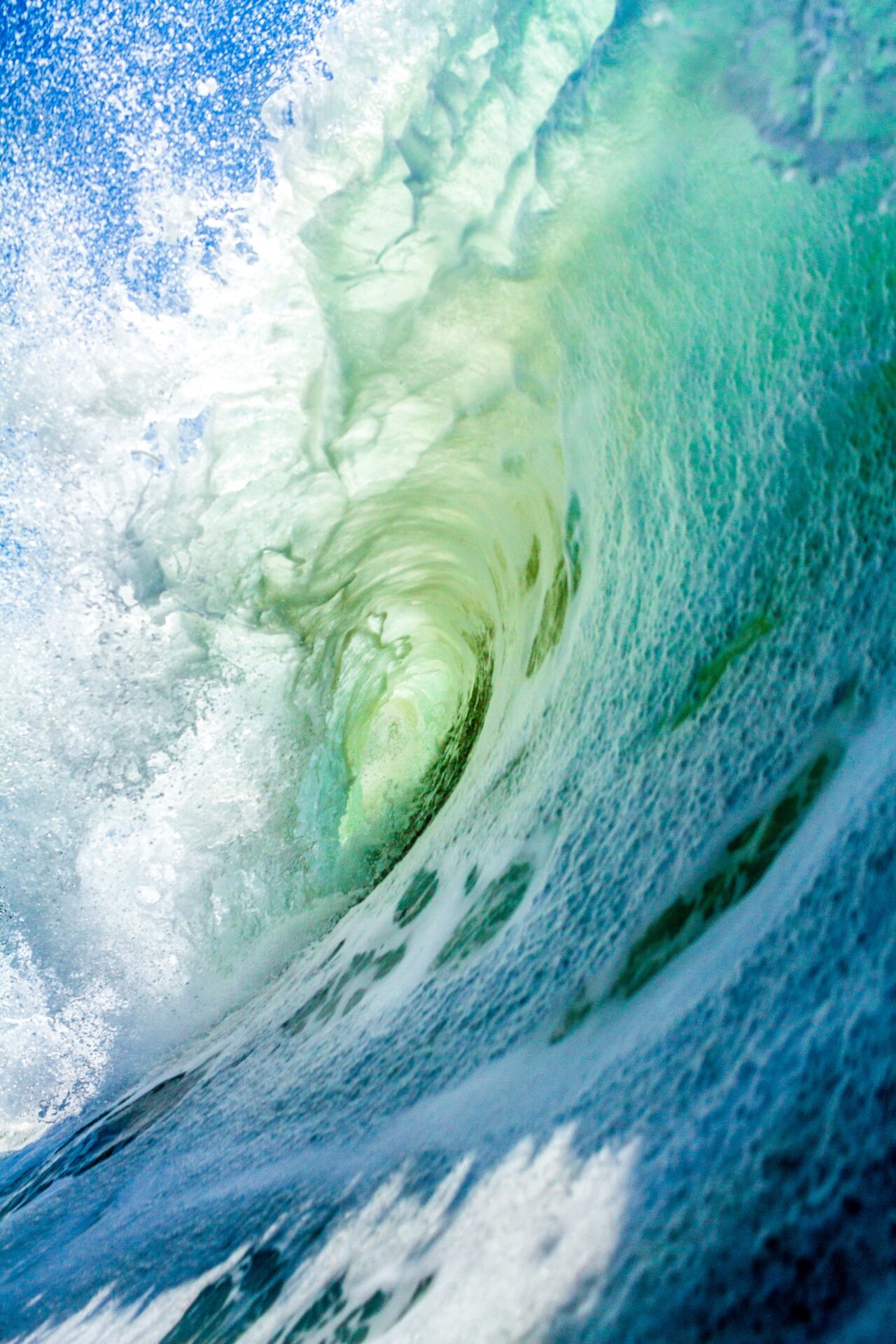 In mid-November the California Air Resources Board (CARB) published initial plans detailing the development and implementation of a light-duty hydrogen fueling station networks, including a focus on financial self-sufficiency.

Within the context of CARB’s report, we evaluated the economics and risks for deployment of Hydrogen fueling station options based on the following:
• Public Safety
• Climate Change and Air Quality – Tank to Wheel (TTW) – Well to Wheel (WTW)
• Gas Station Infrastructure Costs
• Hydrogen Costs at Pump for Consumer

W|EPC Takeaway: As highlighted below, if the primary goal of CARB is to reduce tailpipe emissions, we believe electric vehicles and hydrogen vehicles are the most viable options today. However, if the goal is to reduce total emissions and to implement hydrogen fueling as quickly, safely, and cost-effectively as possible, it opens the door for a mix of other fuel considerations – including biofuels, e-fuels, and other energy mediums to expedite the Hydrogen Economy. We believe how California ultimately balances those priorities will determine what it’s future fueling network looks like. 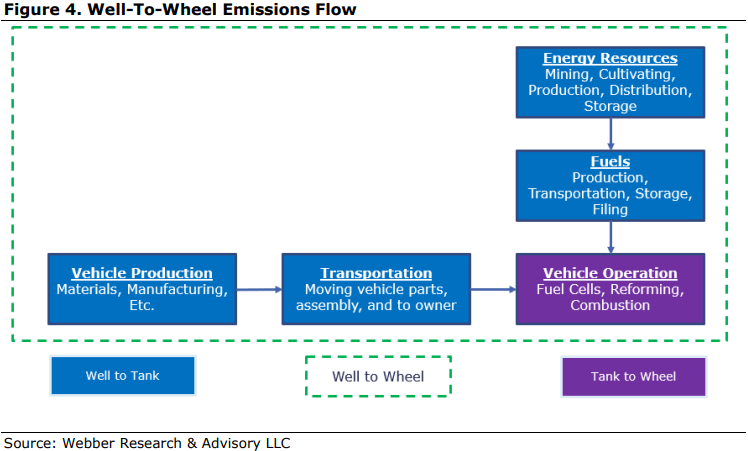 Gas Station Infrastructure Costs
Future fuels (i.e. H2, Ammonia, Methanol) will require new infrastructure in almost all cases to meet federal and state emission guidelines. The Implementation cost of these can vary from storage retrofitting, to +$1 million infrastructure upgrades. The costs could further increase based on the engineering design and blast radius study results.
Hydrogen gas station equipment could include:
• Compressors – 350 bar pressure
• Above Ground Storage
250 bar pressure
250 kg storage
• H2 Dispenser Larger corporate gas stations may have the financial means to implement the costly infrastructure upgrades especially if supported by fuel tax credits. However, smaller gas stations may face challenges investing in the capital costs & the ~$2K/month electricity bill to own & operate the equipment.

Hydrogen Costs at Pump for Consumer: ~$16/kg and by 2030 as Low as $8/kg?
At the pump, the H2 price begins to stack up due to CAPEX, maintenance, safety, and production costs. We have provided a few options that have been considered for comparisons sake below that could further drive down the cost of hydrogen.

For a methanol reforming at pump scenario, storage-related infrastructure costs could be lighter as Methanol is a potential mid-stream solution for hydrogen, and is generally easier to store in large quantities – potentially pushing the hydrogen cost at the pump level below $10/kg in a shorter timeframe. 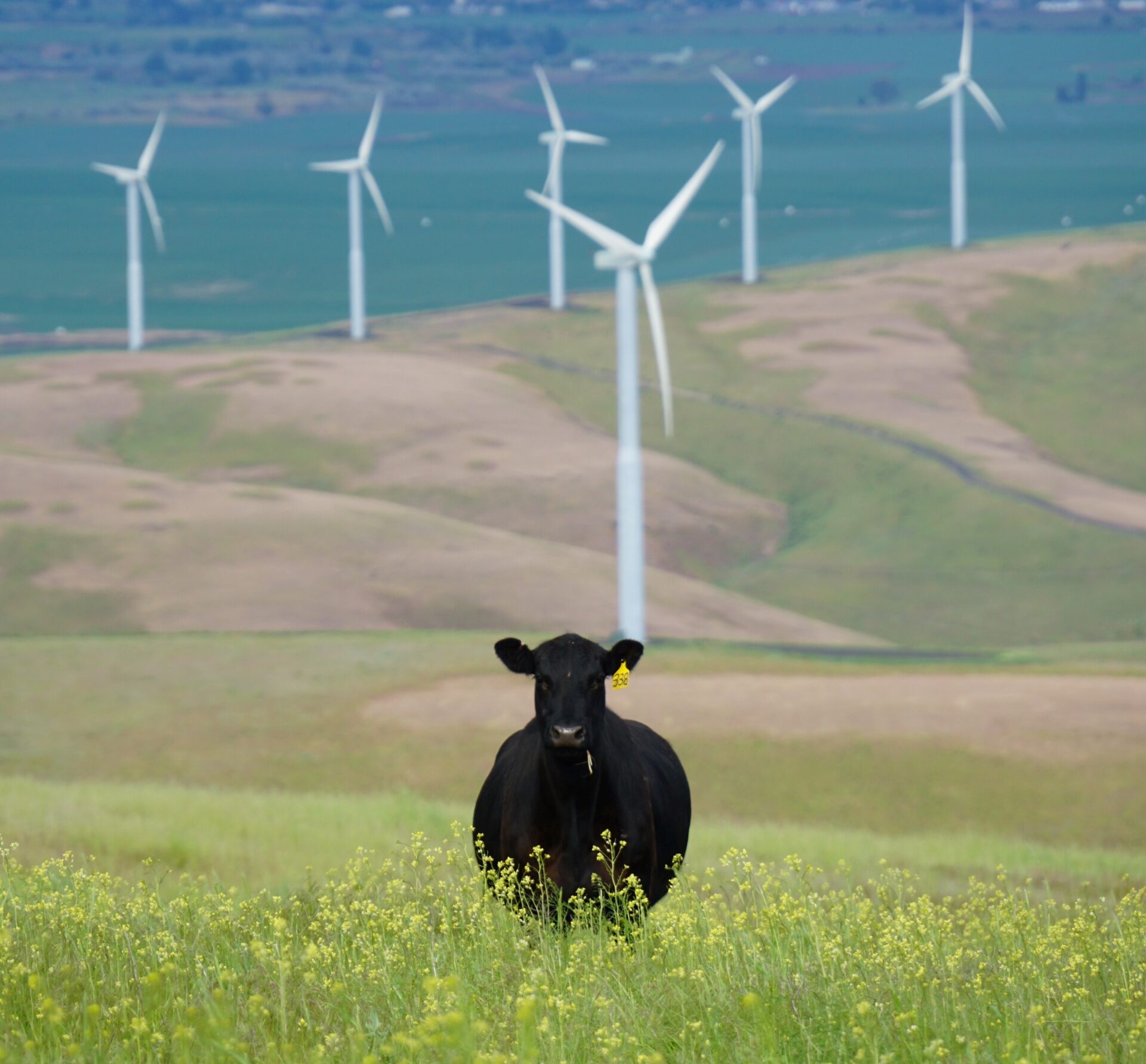 For access information, email us at [email protected], or go to webberresearch.com/downloads 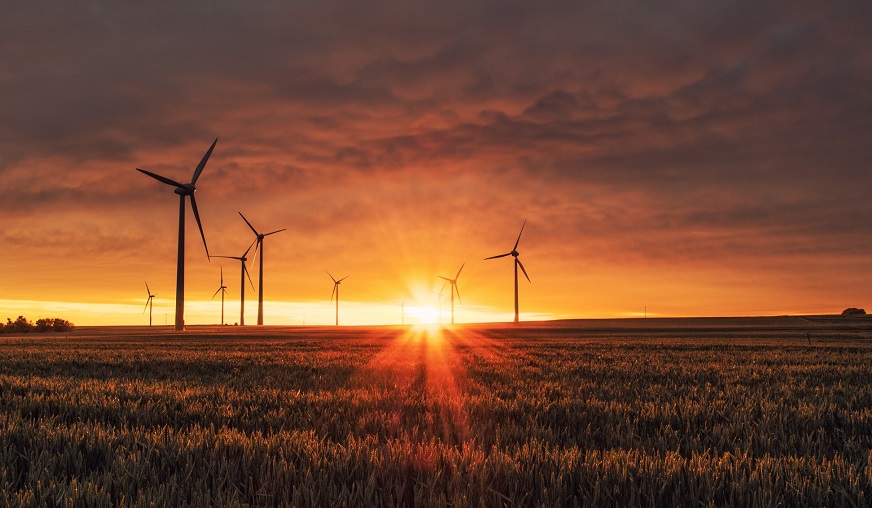 Dominion Proposes 9 New Solar Facilities For ~500MW: On 11/2, Dominion Energy (D) proposed a slate of 9 new solar projects with output of 498MW. Six of the facilities (416MW) are through PPAs, helping to fulfill the Virginia Clean Economy Act (VCEA) requirement of having 1/3 of new solar and onshore wind be procured through PPAs through 2035….

For access information, email us at [email protected], or go to webberresearch.com/downloads 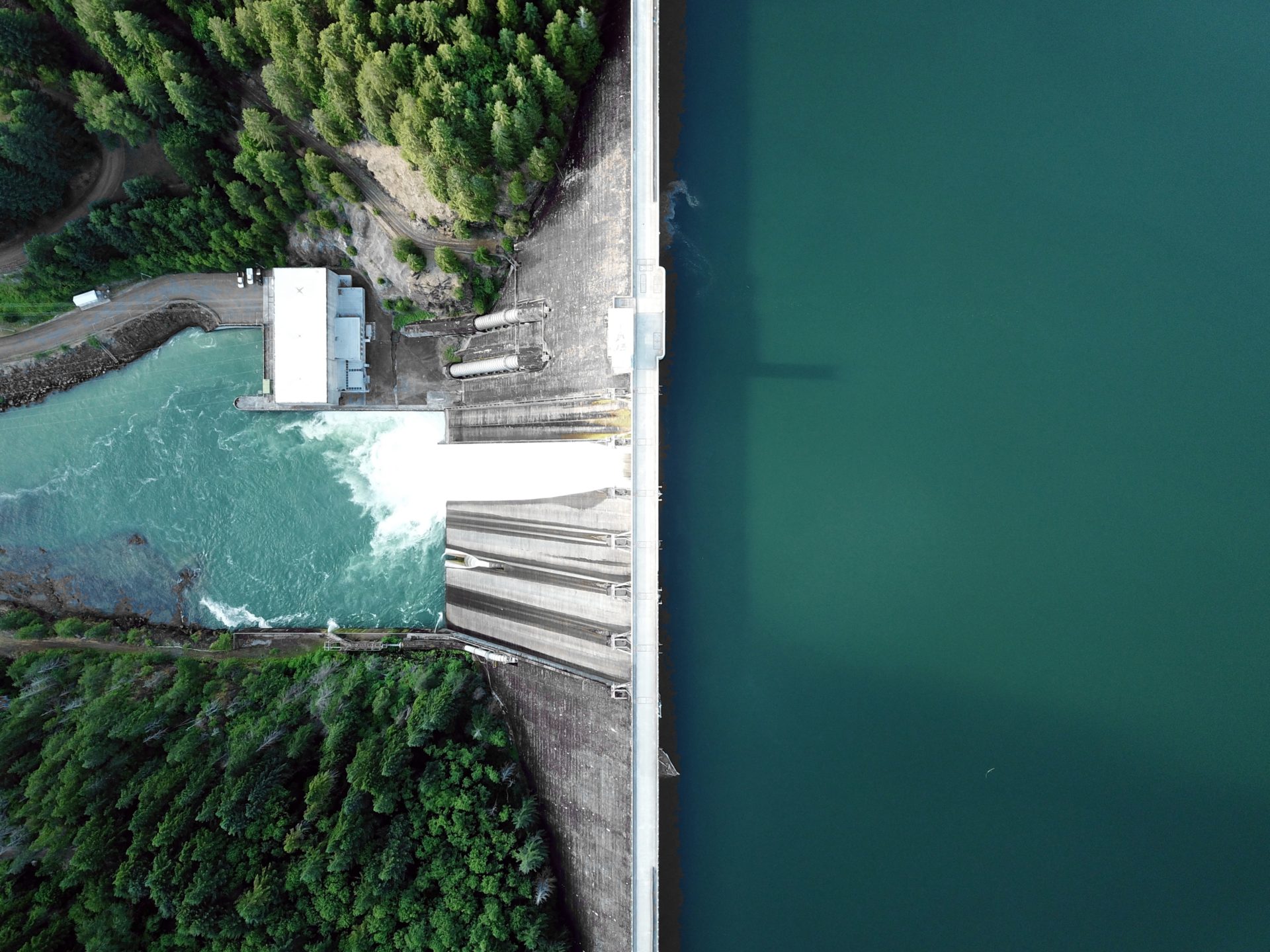 ENPH Partners With 5B In Australia: On 4/22 ENPH announced it would collaborate with Australian solar innovator, 5B in its role in the Resilient Energy Collective (REC) – aimed at providing solar power solutions to Australians disconnected by bushfires and floods. 5B selected ENPH’s IQ 7+ microinverters to pair with its portable Maverick solar array systems, which will also be outfitted with Enphase Envoy with (communication gateway) which connects the system to Enphase Enlighten for easy monitoring & maintenance. ENPH also announced a partnership with Sunlogics in Belgium on 4/29 as its exclusive microinverter supplier using IQ 7 and 7+ microinverters (also outfitted with Envoy). Separately, after the close on 4/27 ENPH was announced to replace Core Laboratories (CLB) in the S&P MidCap 400 index effective before the market open on 5/1. ENPH traded up 16% on 4/28 as a result.

GE Renewable Energy Q1 Earnings: On 4/29 GE reported a $302MM Q1 loss in its Renewable Energy segment, down from a $187MM loss in Q119. Orders declined 13% y/y to $3.1B, which GE attributed mostly to poor execution and only partly to COVIDrelated supply chain disruptions and delays. GE highlighted LM Wind’s sites closures in India and the US and capacity reductions at 3 other sites in its Onshore Wind business (previously disclosed). In its Offshore Wind business, GE remains on track for certification of its Haliade-X turbine and plans to start production after delivering its 80- unit 6MW commitments to EDF (expected completion 2021). In Grid & Hydro, GE is operating 15 factories at full utilization, 10 factories at less than 80% utilization, and 8 factories at less than 50% utilization. Its facilities located in China are operating at preCOVID levels, including Wuhan which was shut down for 6 weeks. Overall GE said COVID-19 has had a limited effect on its Renewables business but that it’s monitoring supply chain constraints and implementing cost-out and restructuring initiatives.

Sunpower COVID Updates: On 4/20 SPWR announced further actions to address the financial and operational impacts of the COVID-19 pandemic including reducing base salaries of executive management another 35-50% (after cutting 25-30% and withdrawing 2020 financial guidance a month earlier), idling factories in France, Malaysia, Mexico, the Philippines, and the US (with expectations to bring them back online in the coming few weeks), and temporarily transitioning a portion of its employees to 4-day work weeks in response to reduced demand and workload (affecting ~3,000 workers according to GTM), but it said it’s still on track to spin-off its manufacturing arm, Maxeon Solar Technologies by the end of Q2.

Safe Harbor Deadline Extension Brought To Treasury: Last week senators from the Energy and Natural Resources Committee wrote a letter to the Department of Treasury advocating a 1yr deadline extensions for the Investment Tax Credit (ITC) and Production Tax Credit (PTC) due to setbacks related to the COVID-19 outbreak. …continued

1) What’s Eating Golden Pass? QP & XOM Get Squirrelly In Press. On April 6th, the NYT ran an exclusive quoting Saad al-Kaabi (former QP CEO & current Qatar Energy Minister) as saying Golden Pass (GPX) was proceeding and on schedule. However, that was quickly followed by QP’s 30% partner Exxon (XOM) cutting $11B of 2020 CAPEX, delaying FID for Rovuma LNG (Mozambique), reiterating Coral LNG’s development, while ignoring GPX altogether. Since then, the NYT took down the article, energy markets are upside down, & questions mount. Based on actual EPC progress, we believe the reaffirmed GPX schedule falls somewhere between…..continued (Pages 2-3)
2) Is Golden Pass In Trouble? Monthly Progress Analysis. We believe GPX’s engineering has remained well behind schedule. Data suggests GPX has been attempting (unsuccessfully) to ramp labor earlier than planned…continued (Pages 9 & 13-14)
3) Labor Logistics In The COVID Era…On 4/17/20, GPX requested additional on-site parking amid challenges with safely busing craft workers to the site amid a global pandemic, however busing craft workers wasn’t supposed to begin for another year (2021). This minor, intuitive disclosure actually offers a few significant read-throughs for the project, as well as its path moving forward…continued (Pages 6-8)
4) Cost Overruns Poised To Accelerate From Here? Over the next 6 months we believe the project is already looking at construction cost overruns (relative to its baseline schedule) of at least…continued (Page 7)